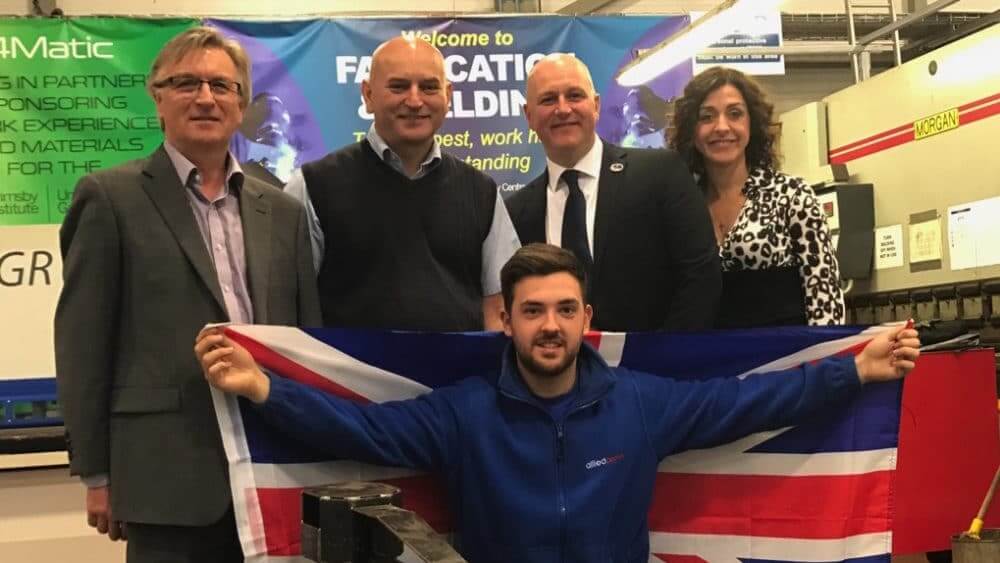 It’s been a tough road so far – gruelling regional and national heats followed by the even more challenging European finals and now the WorldSkills Finals in Abu Dhabi in October – but Allied Protek metalworker, 20-year old Macaulay Reavill, is taking it in his stride.

Already he’s more than proved his proved his mettle as the UK’s best in his field, but even he agrees that going for gold in the ‘Olympic Games’ of construction is going to be his biggest life challenge to date.

Macaulay, who comes from Holton-le-Clay and who joined Allied Protek as an apprentice in 2013, describes representing Team UK as the “best feeling in the world”. Once in Abu Dhabi he will go head-to-head with 14 of the best young metalworkers from across the globe, including engineering powerhouses China and South Korea.

“It hasn’t sunk in really,” he says. “It’s given me the real confidence to believe in myself and be proud. It’s mind-blowing that I can now be considered best young metalworker in the country. But of course I wouldn’t be where I am today if it wasn’t for the support of everyone at Allied Protek. They’ve allowed me the time to do this and have helped me every step of the way. ”

Speaking about the impending Finals, Allied Protek Manager Iain Cowen says: “We have every confidence that Macaulay can do it. We’re already cheering him on as he embarks on the final months of training. It’s going to be tough, but he knows we’re all behind him one-hundred-per-cent.”

In Abu Dhabi, Macaulay will join the world’s elite young skilled women and men who will all be tasked with making a structure out of materials using detailed fabrication instructions. It could be something like a miniature train, log burner or tipper truck, with the margin for error as slim as half a millimetre.

UK WorldSkills construction metal work expert Andy Whitehouse says that to get this far is a “huge achievement” and that Macaulay is “more than capable” of winning a medal. But there’s still some way to go. “At the minute he is only operating at 70 per cent of where he needs to be for the Final. So the push is on to polish out any rough edges and get him ‘Olympic’ ready.”

As you can imagine, the talk at Allied Protek is about little else these days. “We’re delighted to have recruited such a dedicated and talented young man,” says Iain. “Basically whatever it takes, we’ll support him in it and, with less than six months to go, we’re already crossing our fingers and toes as Macaulay ‘goes for gold’!”