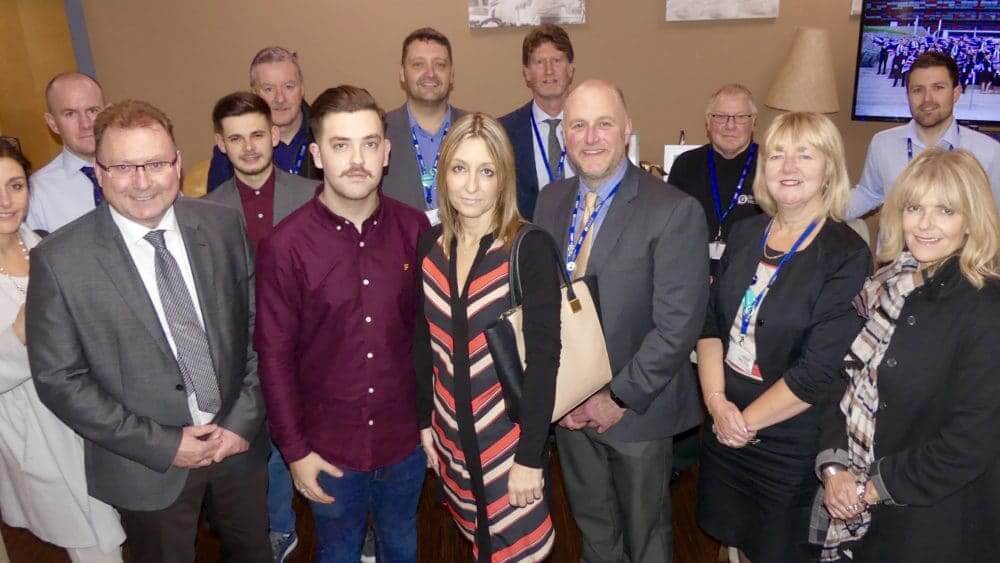 Allied Protek and Grimsby Institute apprentice Macaulay Reavill was given a hero’s welcome home after representing the nation at the WorldSkills finals in Abu Dhabi.

The 21-year-old joined some of the country’s most skilled young men and women at the prestigious event, which saw 37 nations from around the globe battle it out last month.

He also proved able to meet the most testing international standards at a team selection showdown, before finally being chosen to showcase his skills at the highest level.

Chief Executive Gill Alton joined other members of the Institute’s senior management team at Monday night’s celebratory dinner, which was held at the Gallery Restaurant.

Also present was Manufacturing Engineering Curriculum Manager Nick Marshall, who initially set the ball rolling by entering Macaulay into the regional arm of the competition.

“We’ve supported Macaulay as a talent for several years, since he excelled at regionals and was then highly commended at the national competition at the NEC,” he said.

“To get as far as he has done is absolutely phenomenal; he’s the best in the UK in his particular skill for his age group.

“His determination and character have always stood out, as well as obviously his skill level. He also has a real passion for what he does.”

“Macaulay is the first competitor from the Institute to represent his country at international level. Hopefully he will be seen as a beacon for the Grimsby area among young people, and will offer inspiration to others embarking on engineering careers.”

Macaulay, who described the experience as “absolutely massive”, said: “When you get there you don’t realise how big it’s going to be.

“It’s such a worldwide recognised event, you really start to feel the pressure of it when you arrive. I absolutely loved every minute of it, getting to experience different cultures as well.

“It’s also been a massive confidence boost for my career. I’ve started in quite a small town, as a sheet metal work apprentice and I was quite proud of myself just for getting an apprenticeship.

“I never really had any ambition to go any further, it was just take each day as it came. As soon as I got selected for the team it pushed me. The training sessions have really accelerated my learning and the knowledge you get from competing at world-level is unparalleled.”

Praising the support he’s received from employer Allied Protek as well as the Grimsby Institute, he continued: “When Nick said he wanted to put me forward because he thought I was good enough I originally I said no, because I didn’t have the confidence and didn’t want to embarrass myself going forward with something and not winning it.

“I never expected to be where I am now, two years down the line. What I’ve gained from this has been absolutely unreal.

“From what I’ve seen, this is one of the best colleges for equipment and training resources so I’m so pleased I did my training here. I’ve got the best experience possible from it.”

CEO Gill also commented: “The competition is all about resilience and whether they have the capacity to take it to the next level and Macaulay has shone.

“What an achievement; at 21, he’s represented his country.

“It’s really important that what we do enables students to see what potential they’ve got, and to rub shoulders with champions.

“We have more entries than any other college in the region, our staff are brilliant in going the extra mile to help them to compete at the highest level and every year we’re optimistic our students will represent their region and hopefully their country.”

Macaulay’s proud mum Andrea, who also attended the celebratory dinner, said she is “mega-proud” of her son.

“It’s an unbelievable achievement; I’m so proud of him. I don’t think I realised how important it was until we went down to the House of Commons.”

“Macaulay is a first-class employee and an example to every future apprentice or trainee at either Grimsby Institute or Allied Protek.

“He goes out of his way to help the younger ones coming through. This is just the start; he’s only learning the ropes but he’ll go all the way if he wants to. He’s a really good lad.”

WorldSkills UK, which helps young people ‘Go Further, Faster’, is spearheading the use of competition in the workplace, training centres, schools and colleges to inspire the next generation and fill the skills gap.